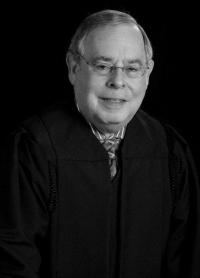 Marin: The judge who knows about going bad

Back in the days when Judge Michael P. Toomin sat on the bench in Cook County – before he became a presiding judge working out of an administrative office – reporters noted the things that defined his courtroom.

There were, behind him, the framed copies of the Magna Carta, the U.S. Constitution and the Declaration of Independence.

There were United States and Marine Corps flags flanking him.

And there was, for every defendant to study if he or she so chose, a framed copy of the judge’s high school equivalency certificate, hanging on the front of the bench.

For a man with such a learned reputation, you’d think he would hang his Northwestern University degree or DePaul Law School diploma there instead. After all, what does a GED say about a man?

For Toomin, apparently, quite a lot.

That GED, and the events that led up to it, make him a special kind of judge.

As my Chicago Sun-Times colleagues Tim Novak and Chris Fusco have reported, Toomin in his youth was, for lack of a better term, a juvenile delinquent. He got in trouble as a teen for stealing a patrol car. The officer who left it running outside a Wilmette hot-dog stand ran after it, firing his pistol as Toomin, who was behind the wheel, screeched out of view.

He ultimately turned himself in and spent three nights in Division One of the Cook County Jail, back in the days when there was only one notorious division and barn bosses ran roughshod over inmates in the lockup.

That final act of lawbreaking capped a number of years of drinking, drag-racing and reckless behavior. He was expelled from New Trier High School, and his “last chance,” he has told friends, was to head to the Marines.

The Marines don’t tolerate incorrigibles. Have no sense of humor for kids who won’t grow up. Or for those who decline to take responsibility.

Is it possible, in ruling in favor of a special prosecutor, that Judge Toomin saw a bit of himself in a drunken 21-year-old David Koschman talking trash and running afoul of a 29-year old R.J. Vanecko?

The answer is probably yes.

Is it possible that the judge also saw himself in Vanecko, a child of privilege, who saw his own alcohol-fueled confrontations make headlines?

Again, my guess is yes.

Judge Toomin’s GED, hanging on on his bench for so many years, seems to me to be a statement that at some point, every one of us has to answer for our actions.