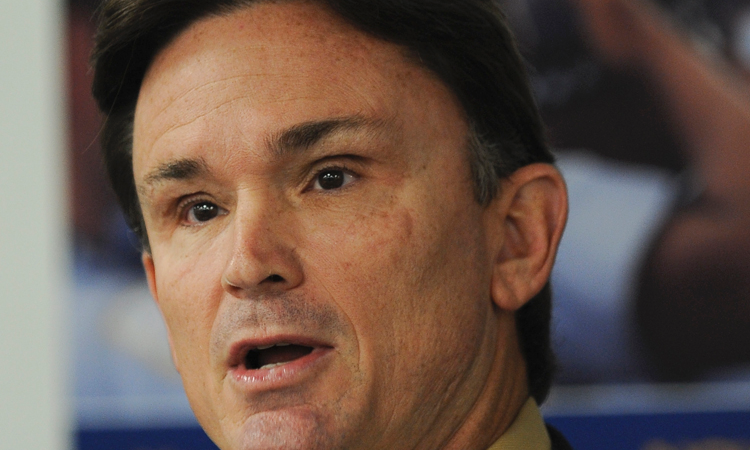 “To me, the entire crux of this matter now is: How did the police department — how did the detectives — arrive at a self-defense claim based upon a comment attributed to Koschman that nobody can attribute to any witness?” Weis says.

“That is, to me, absolutely shocking. If you’re going to draw that conclusion, it’s got to be attributable to someone. You can’t just make it up.”

In a 45-minute interview, Weis says the 10 years it took from Koschman’s death in 2004 until last month’s guilty plea by Daley nephew Richard J. “R.J.” Vanecko is “a very sad commentary on the investigative prowess of the Chicago Police Department.”

“That phrase is nowhere attributed to Koschman or any other witness,” Webb wrote.

Besides blasting the 2011 police report done on his watch, Weis questioned why Vanecko wasn’t charged in 2004, when the police department was led by Supt. Phil Cline and Richard Devine was Cook County state’s attorney. Both were Daley allies.

Weis also says he’s troubled that some of the Koschman case files disappeared and reappeared, with many records still missing.

“There needs to more inquiry to find out how did this happen,” says Weis, who spent 23 years as an FBI agent before Daley named him superintendent in 2008. “Whoever’s doing the internal investigation — be it internal affairs or [city of Chicago Inspector General] Joe Ferguson’s office — there needs to be a very detailed report identifying the findings . . . to prevent any type of embarrassment like this from happening in the future.”

Mayor Rahm Emanuel has said he is awaiting recommendations from Ferguson on whether to discipline Andrews, Cirone or any of the other officers named in Webb’s report.

Webb cited the three-year statute of limitations in deciding that the police and prosecutors who investigated the Koschman case in 2004 couldn’t be charged. He also said he considered filing criminal charges against Andrews, Cirone, Cmdr. Joseph Salemme, Lt. Denis P. Walsh and detectives James Gilger and Nicholas Spanos — all involved in the 2011 re-investigation — but didn’t because there wasn’t enough evidence to convict.

Weis ordered the re-investigation in January 2011 after the Chicago Sun-Times asked to see police records in the Koschman case. He says that at the time he couldn’t believe the case had never been closed because “this was not a complicated case.”

He says he “relied on my subordinates” to make sure the case “was handled right.” They included Deputy Supt. Steven Peterson and Chief of Detectives Thomas Byrne. Both have since retired.

Now that Vanecko is serving a 60-day jail sentence after admitting he threw the punch that caused Koschman’s death, Weis says, “The biggest question is: Where did that statement that was used to generate the self-defense claim come from? . . . A lot of the other questions will be answered in pursuit of that question.”

Two nights before Andrews closed the case, he and Cirone exchanged phone calls and emails, sent from personal email accounts, according toWebb — with Cirone recommending “corrections” to Gilger’s report, including the unattributed statement the special prosecutor says ended up “verbatim” in Gilger’s report.
Andrews emailed Cirone back: “Very nicely done.”

“It’s an official investigation,” says Weis. “I don’t see any reason why you would use personal emails.”

Webb found that the Gilger report’s “conclusion that Vanecko acted in self-defense appears to be based on several faulty premises” — among them that the police had no evidence that any of their nine witnesses recalled Koschman saying, “F— you! I’ll kick your ass.”

“The closest source appears to be a statement . . . of [Vanecko friend] Kevin McCarthy on May 19, 2004, during which Kevin McCarthy reportedly stated ‘at this time the primary kid (Koschman) and another kid were still swearing . . . and saying things like ‘I’ll kick your ass,’ etc.,” Webb wrote. His report noted McCarthy lied to the police twice in the hours after Koschman was punched.

Weis says there “probably was” enough evidence to bring the case to a grand jury in 2004, even though Koschman’s friends didn’t identify Vanecko in a police lineup nearly a month after the confrontation. Since no one identified Vanecko, the state’s attorney’s office wouldn’t file charges, and the case remained open.

Webb’s report found that detectives identiied Vanecko based on witnesses’ statements that the biggest guy involved in the confrontation hit Koschman.

“You have to look at the case in its totality before you just say we’re not going to charge because nobody could identify him, when the detectives clearly identified him,” Weis says.

Regarding the “missing” police files, which ended up at Walsh’s bungalow, Weis says, “I have no explanation why on earth a lieutenant would want to take the file home. . . . As a lieutenant over detectives, he clearly understands . . . filing and maintaining proper record-keeping.”

“There’s still many, many unanswered questions — questions that must be answered by the department,” Weis says. “You’ve got a young man who’s dead. We owe it to his family, we owe it him, we owe it to the community to make sure that we have all the facts.”

These are the six Chicago police officers special prosecutor Dan K. Webb says he considered charging with crimes — but ultimately didn’t — as a result of the investigation that led to last month’s guilty plea by Richard J. “R.J.” Vanecko, a nephew of former Mayor Richard M. Daley, in the death of David Koschman:

The son of Greek immigrants who ran the Lenox Restaurant on Rush Street, Andrews joined the police department in 1990. Within six years, he was a sergeant. At 37, he was promoted to commander of the Intelligence Division and later became commander of the Area 5 detective division.

Sgt. Samuel J. Cirone III
Cirone refused to talk to Webb’s investigators until he was given a limited form of immunity called a proffer to keep his statements from being used against him as long as he told the truth.

Cirone joined the department in 1992 and became a detective in less than three years.

He followed in the footsteps of his father, a 30-year Chicago cop who had a small role in “Thief,” a 1981 movie starring James Caan. That film also featured Cirone’s future brother-in-law, actor William Peterson of “C.S.I.” fame, and used William Hanhardt — the former chief of detectives who years later went to prison for running a jewel-theft ring — as a consultant.

Cmdr. Joseph P. Salemme
Salemme, like Andrews, spoke with Webb’s investigators without any grant of immunity.

He started with the department as a patrol officer 28 years ago, became a detective after five years and rose through the ranks, working in the Cold Case Squad and Gang Intelligence Division.

Det. James G. Gilger
Gilger, 56, refused to testify before the grand jury until he was granted immunity.

He has been a detective for 17 of his 26 years as a police officer.

Det. Nicholas J. Spanos
Spanos — who also had immunity to testify before the grand jury — started working for the city in 1994 as an aviation security officer and became a cop the following year.

Spanos, 43, has been a detective for seven years.

Walsh, 50, spoke with invesigators under a proffer agreement, like Cirone.

Walsh, whose father was a deputy police chief, joined the department in 1986.

Top officials who have left the police department

These high-ranking police officials involved in the David Koschman case have since left the department:

Supt. Jody P. Weis, who ordered the re-investigation of the case three years ago — left the department on March 1, 2011, the day the police closed the case without seeking criminal charges. Weis now works as a law-enforcement consultant.

Michael G. Masters, a lawyer who was Weis’ chief of staff, is now director of the Cook County Department of Homeland Security and Emergency Management.

Deputy Supt. Steven L. Peterson, who headed the Bureau of Investigative Services, retired in 2011. He operates a security company, Landmark Security Group, and takes home a pension of $138,517 a year — among the highest pensions of any Chicago Police Department retiree.

Chief of Detectives Thomas M. Byrne quit last June at 49. Once viewed as a possible candidate for superintendent, Byrne began collecting his pension in December when he turned 50. His pension is $115,879 a year.